skip to main | skip to sidebar

New Poem: Parsnip in a Jar

she made soup
even tho her son had died
and there was no real reason to go on living
she made soup
even tho i had come to give her aid and comfort
she made soup
probably because the thought of me banging around in her kitchen
was more than she could bear
she made soup
because other wise the cold chicken in the 'fridge would go bad
and we were raised not to waste food
she made soup
even tho she had no appetite
she made soup
and whether out of habit
or from some atavistic vegetable imperative that could not be denied
she stuck the top of the parsnip that she had sliced off
into a shallow dish of water on the counter by the sink
and despite the headlines brooding darkly with ominous non-sequitors
"Does God Hate Haiti?"
the parsnip sprouted in a day
the parsnip shot out stringy filaments of roots that stretched and reached like skinny arms
now under water in a jar
the parsnip burst with greenness pushing upwards at the rate of inches every day
the parsnip ignored the headlines and the dark theologies
now, Buddhism is a godless religion
that gives some comfort to disillusioned intellectuals
and others angry at injustice here on earth
but the parsnip doesn't meditate
it doesn't act to relieve the suffering of others
it only grows
and keeps on growing
placid parsnip
green despite our tears
green
not in defiance of death
just growing wildly on the kitchen counter
when nothing else
counts
Posted by La Tigresa AKA Donna Scissors Nieto at 6:44 AM 2 comments:

Tigresa Takes a Taste of Rome 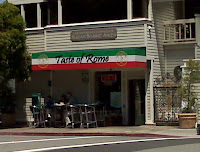 THURS, MAY 21
Taste of Rome
(formerly Cafe Trieste)
1000 Bridgeway, Sausalito
7-10pm
La Tigresa is always the star attraction at the popular Third Thursday of the month poetry salon at Sausalito's hippest cafe.
Join her and other notable poets from far and near at this month's feast of spoken word and music. The food is great, the coffee is famous, and the wine, as always, flows freely.
Posted by La Tigresa AKA Donna Scissors Nieto at 6:04 AM No comments:

There's a new catch-phrase going around: "It is what it is" - usually accompanied by a shrug of the shoulders at the wacko ways of this wicked world we live in.

I like this expression. It's cool in a Buddhist sort of way; a zen-like diving into the moment, a peaceful acceptance of the immutable flow of the Tao and all that cosmic shit. I dig it.

But - I have to ask myself the next question, which goes something like this: "Sure, it is what it is (global warming, my mom needing round-the-clock care, my boyfriend going to Amsterdam without me, my increasing forgetfulness...) but -- does it suck?"

And the inevitable next question after that: "If it sucks, is there anything I can do about it?"

This is where that old AA prayer comes in handy. You know, the one about "the wisdom to know the difference" between the things I can actually change and the non-negotiable stuff I just have to hold my nose and swallow.

In dealing with my increasingly debilitated 82-year-old mother, "It is what it is" has become a most useful mantra. No matter how much I visualize, hope and pray, my mom is not going to get up and go bowling any time soon. Her bowling days are over. So are her driving days. Even her walking days are getting pretty shaky.

Time marches on. Or, in this case, time haltingly stumbles on, fuhrblunged and klutzy, leaning on its walker and barking out orders to intimidated care-givers. My mom will never be young again. It sucks, but...it is what it is.

And my boyfriend -- despite how much more sensible it would be for him to simply do everything I want, exactly when I want it, exactly the way I want it - well, gosh durn it, he seems to have developed a mind of his own and frequently does his own thing with it.

(Although, to his credit there are certain areas in which he has definitely mastered the art of doing exactly what I want, exactly where I want it, exactly etc etc. etc.)

Tigers are on the brink of extinction. Billions of dollars are spent on insane war games played by certifiable idiots that result in the deaths of innocent people, every one of whom is someone's son or daughter. It sucks...but it is what it is.

(And...what? Wasn't there another example I had, something else timely and relevant? I hate it when I can't remember what I was going to say next. It sucks, but it is what it is.)

No, wait a minute. Wait just a gol-darned minute here. Who SEZ I/we/he/she/you can't change the changes that are coming at us faster than a speeding bullet of destruction?

No more tigers on planet earth? Just a few scraggly specimens drugged out in zoos? No more polar ice-caps, just a slushy mush of a mess on this once-fertile, but soon-to-be crispy bio-sphere?

It is what it is, but it ain't what you think.

God has granted me the courage to accept that I can't change certain things (my boyfriend's hair cut, my mom's arteries.)

But God has also granted me the chutzpah to believe that I can change other things. It's my planet and I'll cry "FOUL!" if I wanna.

And guess what, my dear blog-ophiles out there in cyberland?

It is what it is – but what exactly is that? It’s time to wake up and take a stand - that’s what it is.

Tiger habitat can be preserved, protected and enhanced. Tigers don't HAVE to go extinct. The bozos can be voted off the bus. All of them. Off all the buses.

War can actually be outgrown like the obsolete technology it is, and replaced with less barbaric, less medieval conflict resolution strategies. Climate change can be...acknowledged, addressed, and with a hellacious amount of work maybe, possibly, reversed or mitigated.

But some people are cock-eyed optimists who refuse to go down with a sinking planet. Some people, like you, and like me, are gonna turn this baby around and do whatever it takes to repair the damage and continue the groove on planet earth.

It's a dirty job, and it won't be easy, and it might be messy, smelly, sweaty and scary. But someone's gotta do it. Me and you.
Posted by La Tigresa AKA Donna Scissors Nieto at 11:22 AM No comments: